Some Red Label FG’s come with a “K” stamped near the label, sometimes referred to as “Special K”. 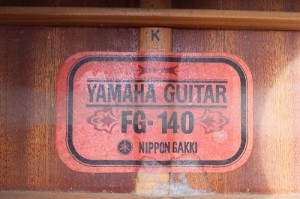 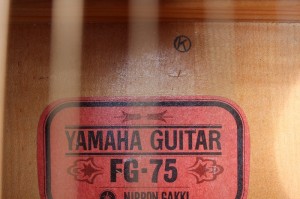 Hard to say how many do but out of my 7 red label FG’s 3 have the “K” stamp, so until proven different I would say that they’re not very rare as some claim.
The “K” goes through the whole early FG range. You can find them on the low end FG75 as well as the high end FG500.

Some claim that the K stamped FG’s are of better quality. I never noticed any difference though.

One of the other stories to be found on the www is that the “K” stands for “Kiln dried”. That doesn’t seem plausible either. Based upon the location the “K” must have been stamped at the end of the production proces. Further Yamaha since the early years claimed they were using a combination of natural drying first and after that a kiln treatment.

Recently (thanks to Philip Holzbauer) I think we solved the problem: Information from Yamaha says it’s actually not a “K” but a stylized Kanji inspection mark. It just means it passed inspection. No quality difference.