If you look at vintage Japanese catalogs and compare them with same era European or US catalogs there is a striking difference in headstock printing. I don’t know what the reason was, but there shurely must have been a good reason becourse this made production more complicated than using just one head logo.

In general (perhaps with a few exceptions) the late 70’ies and early 80’ies headstocks for the Japanese market had a full written script type name, with Yamaha in small lettering. The export models had Yamaha in big lettering, and just a few letters and the number to indicate the name of the guitar.

Now a typical export headstock of the SC1200: 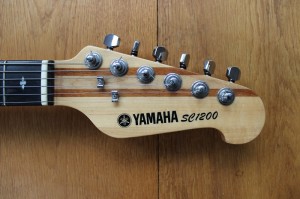